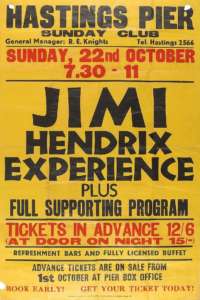 Having served a tough apprenticeship playing with The Isley Brothers and Little Richard, he became instantly successful when he came to England to launch his career in the autumn of 1966.

Teaming up with Mitch Mitchell and Noel Redding, they became ‘The Jimi Hendrix Experience’ and signed to The Who’s newly formed record label Track Records managed by Kit Lambert and Chris Stamp.

Jimi’s solo career lasted for just four years before his untimely death in 1970.

His body of work and reputation forged during this short period is nothing short of extraordinary.

If you have any Jimi Hendrix memorabilia please call us on 01494 436644 or email us on music@usebriggs.com to find out what your items are worth.